While looking at the stunning masterpieces created by the Chinese through the application of the one-of-a-kind Dongyang wood carving technique, one can certainly lose track of time and space.

And indeed, the rise of the Dongyang wood carvings in China relates perfectly to one of the ancient Chinese proverbs which say that “A man grows most tired by standing still.”

The last thing we can imagine about the intricate amount of skills and work needed to finish the meticulous Dongyang carvings is that the master wood carver would simply stand still!

However, to some extent, being able to recreate the ancient and complex technique of Dongyang does require loads of patience, as well as stillness that needs to embrace the entire being of the woodcarver.

Or else, it would be impossible to create all the tiny details which make the carvings look more like modern-day three-dimensional art than anything dating all the way back to the reign of the Tang Dynasty when Dongyang first came into being.

Below, we are heading on a journey to discovering the secrets and beauty of the traditional Chinese Dongyang wood carving technique.

A Brief History of the Art of Wood Carving in China

A pair of attendants/shamans, made out of wood with cinnabar and black lacquer, Hubei Province China Warring States Period – Image Source

For a start, Chinese wood-carving has a long and honored history.

According to researchers, it dates back to the Neolithic Period. However, it was in 1980 when archeologists unearthed the oldest wood carving in Hubei Province.

The experts believe that it was made during the Warring State. When it comes to the age of the earliest existing wood carving, it is estimated to be approximately 3000 years old.

Wood carving in China went through 4 main periods of flourishing.

And while this period was generally marked by instability, it was also the time when various Chinese ornaments and furniture made out of wood were rapidly developed.

More evidence about the flourishing of wood carving also come from one of Han Yu’s poems where he describes a wood carved figure beautifully and explicitly.

A sculpture of a lion with wings; Mausoleum of Emperor Wu of Southern Qi Dynasty – Image Source

The Song Dynasty was established in 960 and is historically known as the Northern Song Dynasty.

The period of the Song Dynasty was marked by great economic development, contrary to the insecurity which kept shaking the reign of the Southern Qi Dynasty.

However, it was in 1271 in Kublai, when a descendant of Genghis Khan founded the Yuan Dynasty. Initially, he made Dadu the capital of the dynasty, as the territory of Dadu back in time is the well-known up-to-date Beijing.

Most importantly, what unites the period of the Song and Yuan Dynasties is the so-called period of the “4 great inventions,” namely printing, papermaking, gunpowder, and the compass.

Moreover, the development of the art of wood carving during the reign of the Yuan and Song Dynasties is marked by the fascinating way some of the painters turned towards painting the wood carved masterpieces.

Nevertheless, the Qing Dynasty was the last of the imperial dynasties.

Most noteworthy when it comes to the Chinese art of wood carving during this particular period is that it managed to reach new heights.

As a result, many artists started to specialize the discipline of wood carving. Subsequently, this did not only help to preserve the ancient legacy of Chinese wood carving but it also helped to upgrade the skills of the talented descendants of generations of masters wood carvers.

Wooden sculpture dating back to the Qing Dynasty – Image Source

For a start, it’s important to understand that Dongyang is not merely the name of the finest type of Chinese wood carving art.

Instead, Dongyang is actually a province in China. Thus, the city of Dongyang is located in the very heart of Zhejiang Province. Up-to-date, the population of the city is estimated at approximately 130, 387 people.

Altogether with the legendary Dongyang wood carving style, the Chinese handicrafts of creating exquisite objects and decorations with the use of wood are divided into 4 major schools.

Certainly, all of the woodcarving schools are highly respected. However, Dongyang is reputed as a national treasure and widely labeled as one of the best traditional Chinese folk handicrafts.

Just like we discussed above, it was during the reign of the Qing Dynasty that the art of Dongyang underwent a massive boom.

Moreover, it was during the reign of Emperor Qianlong from the Qing Dynasty when over 400 gifted woodcarvers who practiced the art of Dongyang were hired to restore the glory and beauty of the palaces in the capital.

Dongyang wood carvings are unique for the intricate, fine details which turn any object touched by the Dongyang technique into an exquisite masterpiece.

Interestingly, it was in 1914 when the first Dongyang factory – the Renyi Factory, was established. However, only several years after the factory was founded, the Dongyang craft was faced with hard times, mainly due to the civil war which took away the focus from the fine art.

Fortunately, up-to-date there are more than 3600 Dongyang woodcarving varieties. Moreover, the craft keeps evolving and the fusion of the ancient traditions with modern-day innovations makes up for a truly spectacular development of the unique Dongyang technique.

Lu Family Residence: A Place to Experience the Beauty of Dongyang Wood Carving Skills of Generations of Talented Artisans

And indeed, letting your eyes sink into the multiple wood carvings which generously decorate the entire residence is mesmerizing.

True to the traditions of the Dongyang craft, there are various scenes varying from natural patterns through mythological creatures.

Mr. Feng Wentu, who is the inheritor of China’s National Intangible Cultural Heritage Dongyang Woodcarving shares there are more than a dozen different techniques used in Dongyang, including circular carving, relief carving, semi-circular carving, and the modern-day multi-layered wood carving.

It is inspiring and uplifting to see how the young artisans keep upgrading the art of Dongyang while still being true to the very roots of the ancient craft.

Certainly, it is crucial that despite living in the 21st century and surrounded by endless technologies and opportunities, we do find the time and will to preserve the wisdom of ancient techniques for the next generations to come.

Guilhem Bouissou who comes from France is enchanted by the art of Dongyang craft. As shown in the picture, he carves wood in Dongyang – Image Source

Up-to-date, China’s population is approximately 4 times bigger than the population of the USA. Nevertheless, China is well-known as a country with a robust economic growth.

However, the invaluable cultural inheritance of the Chinese Dongyang wood carving technique is not typically ranked among the first associations we have about the country. Meanwhile, a traditional Chinese proverb goes like this “When the winds of change blow, some people build walls and others build windmills.”

Our world is in a dire need of embracing the type of mindset which will allow us to build windmills instead of walls. When looking back at the legacy of ancient crafts, we can learn so much about the way our ancestors understood the meaning of life.

In Buddhism, which is considered the most widely-spread religion in China, the lotus flower symbolizes purity of the speech, the mind, and the body. That’s just like the way the lotus flower is rooted in the mud but succeeds in revealing its beautiful, neatly arranged petals all the way up by floating in the water.

Similarly, no matter how many years pass and how many challenges cross our paths, we are able to nurture and preserve purity in our hearts and minds.

And preserving the traditions of the ancient arts such as that of Dongyang wood carving is one of the ways to unravel the lotus flowers from history, and not merely let them drown in the mud.

Above all, the usage of wood from ancient times until now is an invisible thread which is capable of melting away any boundaries, as we indulge and learn how to cherish the crafts of the different nations all throughout the globe. 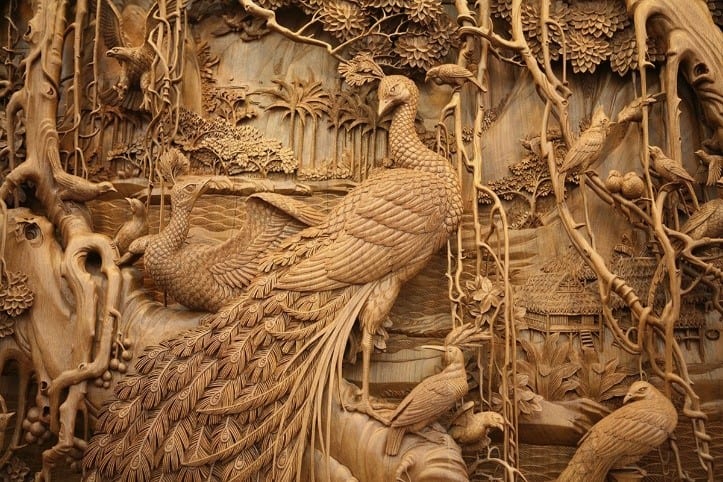