The most notable thing about the Bosch ROS20VSC Random Orbit Sander is that in my opinion it’s the most user-friendly random orbit sander out there. Using it is almost self-explanatory. You turn it on and uniformly pass it through a given surface until the whole thing is smoothened out. I’ve seen beginner DIY homeowners to professionals using the ROS20VSC satisfactorily and I recommend this for your next woodworking project.

Long story short, the random orbital (or orbit) sander is named as such because it “randomly” creates multiple paths in the same rotation in such a way that it never travels the same path twice during the same rotation. This doesn’t only help with avoiding swipe marks that make it obvious you used an orbital sander on a piece of wood. It also ensures that you can go from coarse sanding to fine sanding on the same unit. Created back in 1982, it’s a fairly recent invention that has changed sanding forever.

No longer will you need a separate belt sander and orbital sander in order to do your sanding work. You can now depend on a single sander in order to do both jobs, which are the initial grinding of really rough spots in an aggressive manner then a slower and more methodical detailing stage. For the past decade, this sander type has become the most commonly availed of power tool in the shop next to the drill and saw hand tool.

Most importantly, they don’t cost an arm and a leg anymore. They’ve lowered their prices so significantly, the most expensive ones cost $140 and the cheapest ones are less than $30. They also get the job done in a quick manner, such that even the least effective of the random orbit sanders has value just because they’re this type of sander. You won’t have to deal with sanding marks that you have to manually remove by manually sanding them yourself with sandpaper and your own hand.

In general, it’s for amateur beginners and advanced users or professionals alike. To be more specific, it’s a random orbital sander made for all sorts of construction workers and woodworkers alike since it is best used as a woodworking sander versus an aggressive belt sander that smoothens or sharpens out knives, blades, and metal in a linear manner.

The nonlinear or random approach it has to smoothening has allowed the random sander to enjoy the best of both worlds in terms of fine and aggressive sanding. The random orbit sander is capable of varying the head or disk’s angle of rotation so as to avoid a nonrandom cyclical or predictable pattern that typically results in swipe marks and ruts when not used properly.  That’s how this sander displays sanding excellence.

This also means you can move the sander in a linear pattern without you needing to make circular swipes to cover the surface. You will not end up with flaws and marks from your sanding even when you do this because the sander has been designed to never move through the same path twice in a given rotation. This is a great improvement to the palm or sheet sander, which instead has an advantage to be mobile and small rather than wide and random.

What Benefits Should This Orbital Sander Have?

Every random orbital sander should have the following benefits.

When buying a random orbit sander, sometimes bigger is better. You don’t want something that’s big to the point of cumbersome, though. Rather, you should specifically search for sanders with bigger motors so as to better facilitate either faster removal of material with high OPM rates or stronger torque per orbit to deal with the roughest of rough patches. It should be a fixer-upper you can dust off and use at any time you need.

There are several ways a random orbital sander can go about reducing hand fatigue. It could be lighter and smaller or it could be better designed so that its weight and motor strength are balanced together to minimize hand vibrations. It could also be extra powerful to allow for faster sanding overall, limiting the need for extended usage. Whether you’re sanding through baseboards or an entire table surface, the sander should work excellently and mitigate human error.

The most highly recommended sanders are those that anyone can use. A good sander allows even amateurs to produce excellent results because they don’t complicate their usage. The most complicated thing you should be able to do with these sanders is switch speeds so that you can do slower and more meticulous detail sanding over the high-powered and aggressive rough sanding.

Things to Consider When Buying an Orbital Sander

Here are the things you should consider prior to making a random orbit sander purchase.

All random orbital sanders move the pad in a motion similar to the sheet sander but it uses an offset drive bearing that adds extra movement to the pad in an elliptical pattern to ensure that it never travels the same path twice in one rotation. To separate one sander from another, you should judge it by its price (which is cheaper) versus its quality (which one is more maneuverable or which one covers more space).

After settling on a budget or price, the best way to judge which sander is better than the other is to know which one produces the most swirls left behind when the multifaceted “random” pad movements are used in combination. Some orbital sanders have a wider range in speed while others improve upon their (standard 12,000) OPM rate by adding more torque to every orbit.

Sanding disks are available in various grits, from 60 (the coarsest) to 220 (the finest). You shouldn’t only pick your pad depending on what sort of surface you’re sanding. You should also choose them based on whether they attach to the pad with the Velcro-like hook-and-loop system or the cellphone-stand-like pressure-sensitive adhesive system that doesn’t leave residue when it sticks.

The Bosch ROS20VSC Random Orbit Sander is a sander that doubles as a metal polisher because unlike other single-speed sanders, it can reduce or increase its speed depending on the application. Whether you want to clean out a dirty countertop without ending up with scuff marks or sand through raw timber, the ROS20VSC is quite dependable.

With its varied speeds, its securely hooked pad, and 2.5-amp motor, the Bosch ROS20VSC is better than most when it comes to getting the smoothest sanding results.

You can turn up or down the speed of the Bosch ROS20VSC depending on what you want to use it for. You can do slow yet methodical fine grinding at 7,500 OPM with a fine sandpaper or eat through the roughest material at 12,000 OPM with coarse sandpaper.

Never worry about tiring your arms or getting carpal tunnel syndrome with your palms thanks to the ergonomic design of the low-vibration ROS20VSC. Its handle is soft-grip and fits perfectly in your palm without making you hold it at an awkward or tiring position.

The unit has a micro-filter system that makes sure most of the sawdust or debris is caught within its dust-catching canister so that you’ll only have to do minimal vacuuming at most.

The Black & Decker BDERO100 is way cheaper than the Bosch ROS20VSC, but cost isn’t everything. The question that needs to be asked here is whether or not the ROS20VSC can justify costing nearly twice the BDERO100 in terms of specs and overall benefits. In some ways it does and in other ways it doesn’t. The ROS20VSC is only slightly heavier than the Black & Decker by 0.3 pounds.

They share a 12,000 OPM speed, but Bosch has a wider speed range while the Black and Decker unit can only go one speed. Also, the ROS20VSC has extra features like a micro-filter system and a contractor bag.

What’s more, the PORTER-CABLE 382 has a slightly lower rating at the time of this writing, which further solidifies the high rating Bosch received. They have roughly the same specs, weight, and even size (since there are only a few inches of discrepancy). However, for an extra few dollars, you can get more bang from your buck with the Bosch ROS20VSC.

For a change, the PORTER-CABLE 7346SP is more expensive than the Bosch ROS20VSC. The question here now is whether or not the 7346SP is worth having nearly twice the price of the ROS20VSC. Some might argue this isn’t the case because the PORTER-CABLE unit weighs almost twice as the Bosch unit, making it certainly more unwieldy to use.

What’s more, it can only go as fast as 6,800 OPM, which doesn’t even reach the lowest speed setting of the ROS20VSC (which is 7,500 OPM). However, on the flip side, this other PORTER-CABLE unit is perfect for fine sanding applications and covers a wider area faster thanks to its body size and its 6-inch disk diameter.

The 3M 20317 Random Orbital Sander is the most expensive random orbital sander on this list and article. How does it compare to the Bosch ROS20VSC? Is this sander worth the extra coinage needed to buy it? In fairness to 3M, it has probably the lightest sander on this list, so in terms of weight and ease of maneuverability, it’s probably superior to everything else.

However, for something that weighs so little, it has a size that’s more comparable to the likes of PORTER-CABLE 7346SP and DEWALT DWE6421K than the other more petite sanders on this list (particularly the Black & Decker BDERO100). Furthermore, it has the standard 12,000 OPM speed and an impressive rating. However, only 14 customers have rated it so far, so its rating could change in the future as more people try it out.

The DEWALT DWE6421K is only about few dollars more expensive than the Bosch ROS20VSC. With such a close price, do they have specs that are comparable to one another? Aside from having to live up with the proud DeWalt name, the DEWALT DWE6421K has some pretty standard specs like the 12,000 OPM single-speed rating and its 5-inch disk diameter size.

It also weighs 4 pounds, which means that (appropriately enough) it outweighs the Bosch ROS20VSC by 0.8 pounds the same way it out-prices the unit by a couple of dollars. In terms of size, it’s the second biggest orbital sander on this list next to the wide-area PORTER-CABLE 7346SP (the DeWalt unit is the second heaviest sander as well).

The Bosch ROS20VSC Random Orbit Sander is a highly recommended sander for beginners and advanced users alike because of how easy it is to use.  It particularly excels in having features not found in other sanders (a micro-filter system) and meeting or exceeding the standards of specs it does share with other units.

It even facilitates fast removal of materials at its top speed of 12,000 OPM but can also do excellent buffing and polishing of surfaces for speeds as low as 7,500 OPM. The machine is also compatible with vacuum hoses with the size of 1¼ and 1½ inches. Long story short, even though many other sanders can outdo it in certain aspects, it’s well-rounded enough to stand out on its own. 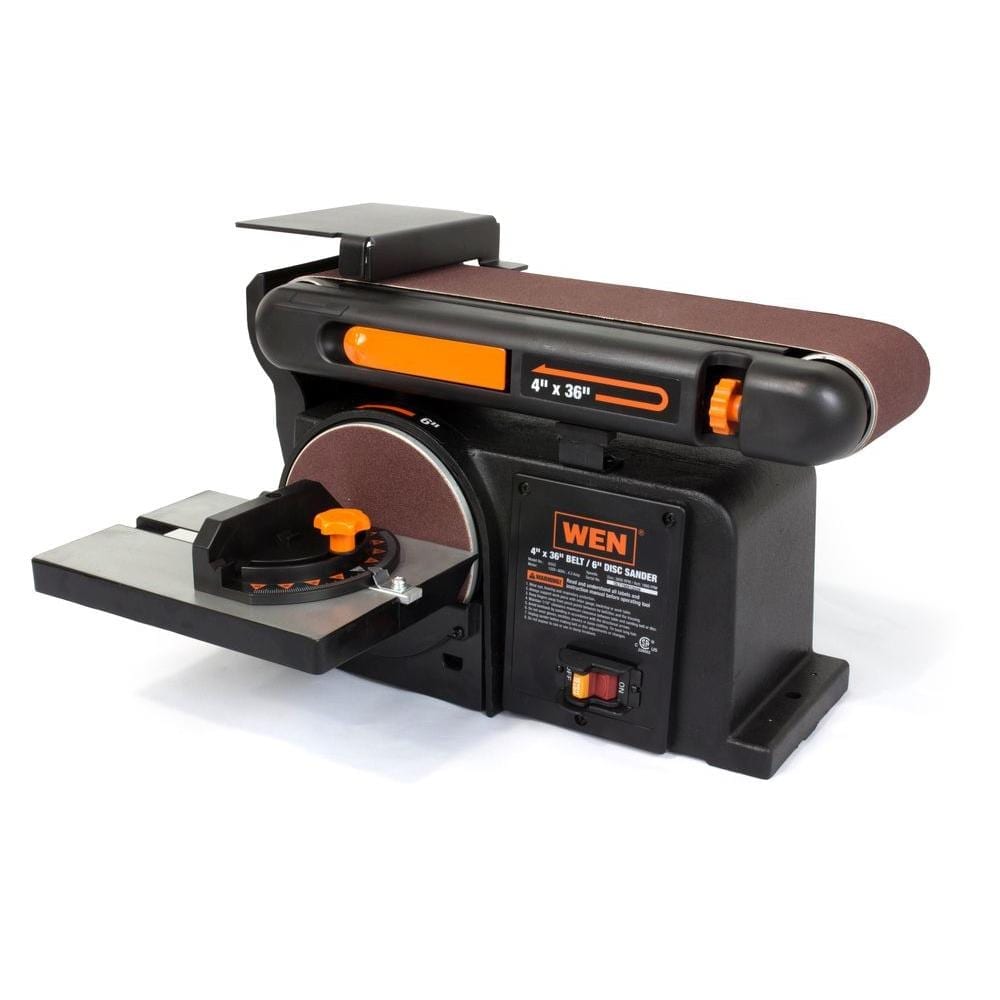